Spanning Tree protocol is a loop prevention mechanism in a bridged LAN. Every STP topology has its own root bridge, which determines how STP topology is calculated. The role of the root bridge is to act as a reference point in the network, so that all other switches can determine, how far each of their ports is from the root bridge. The port, which has the lowest path cost, is placed into a forwarding state. All other ports, that can lead to the root bridge, are blocked. Ports in the switching topology, which lead away from the Root Bridge, remain forwarding. You can recall STP operations reading the following article: “Multiple Spanning Tree Protocol on Huawei switch“.

How does the root bridge election process work?

The root bridge for each STP instance is determined by the bridge ID. The bridge ID consists of a configurable bridge priority and the MAC address of the bridge:

How to change the bridge priority on Huawei switch?

A predefined macro can be also used to change bridge priority:

The first option changes priority to 0, the second to 4096. Default bridge priority equals to 32768.

Any switch can be a root bridge in a network. But the most optimal forwarding topology places the root bridge at a specific predetermined location. Let’s take the following example: 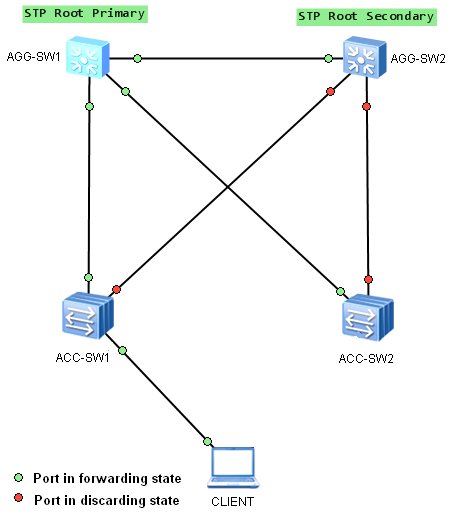 Aggregation switch AGG-SW1 was elected as the root bridge and AGG-SW2 as the secondary root bridge, in case of AGG-SW1’s failure. STP topology was built as expected, fast speed links are used to forward traffic between devices.

Even if the root bridge was configured with priority 0, every switch in this network, with priority 0 and a lower MAC address, can be elected as a new root bridge. Let’s imagine a situation, where someone connects additional switch, or just a software-based bridge application lunched on a PC with dual NICs and lower bridge ID, like below: 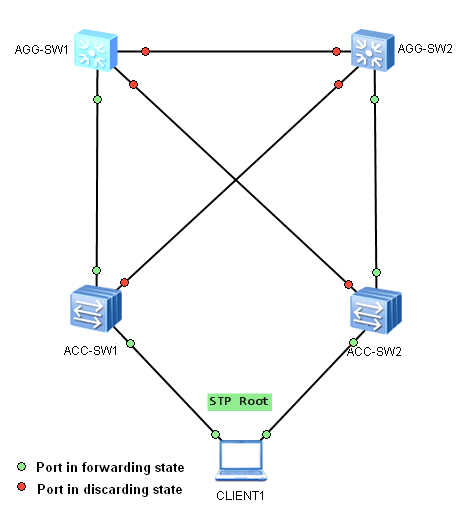 Our PC was elected as a new root bridge for this VLAN. STP topology was changed and now, low-speed access links are used to forward traffic between aggregation switches. If more data flow via the aggregation link in that VLAN, than this link can accommodate, the drop of some frames occur. As a result, network performance can be affected. 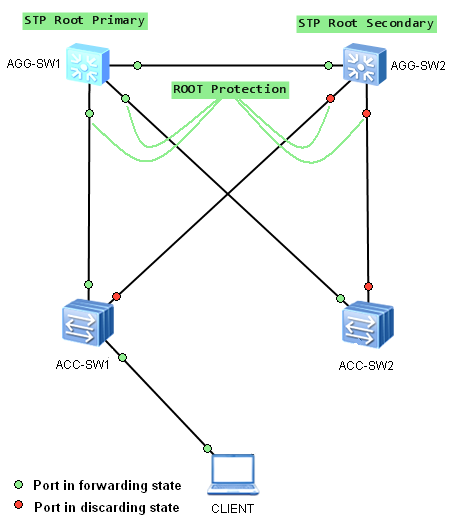 To enable Root Protection on Huawei switch, use command:

Remember, that root protection takes effect only on designated ports.