In the era of ethernet transport technology we cannot forget about older, but still widely used ATM and FR technologies. Taking OSPF into consideration, it classifies networks based on link layers protocols. That’s why we have such terms like: 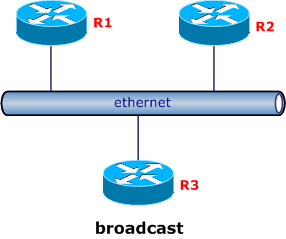 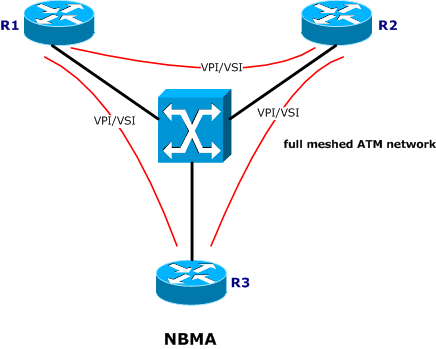 ATM and Frame Relay are typical examples of NBMA networks. NBMA simulates broadcast network. It must be full meshed and every router in the segment must be configured with IP address of each of its neighbours. In NBMA networks all OSPF packets are transmitted in unicast mode. DR and BDR routers are elected as well.

A P2MP network, unlike full meshed NBMA networks, is a collection of point-to-point networks. As this is P2P, DR and BDR are not needed. OSPF network type must be manually configured because the network is not fully meshed. Inverse ARP should be configured on an interface. Hello packets are transmitted in mulitcast mode through the mulicast IP address 224.0.0.5. Other OSPF packets are transmitted in unicast mode.

In this type of networks, OSPF protocol packets, such as Hello, DD, LSR, LSU and LSAck packets, are transmitted in multicast mode using 224.0.0.5 multicast address. As this is a link between exactly two points, each packet sent from one router have only one recipient on the local link.

Command to change network type on Huawei router for a specific interface:

Command to set IP addresses for adjacent routers on an NBMA network: