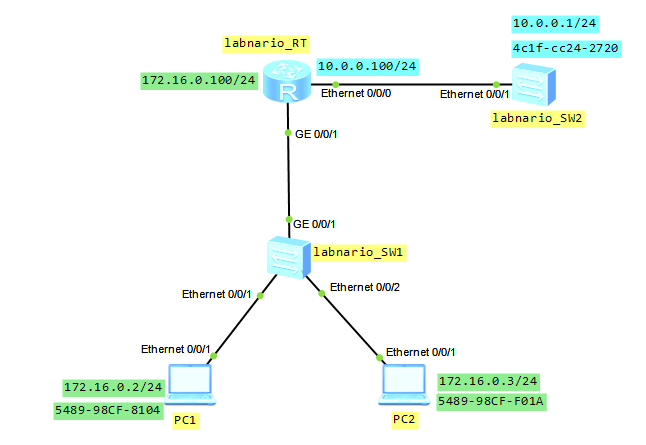 And an essence of our lab:

From the captured packets we can see how arp-ping IP works. It sends ARP Request packet. A host or routing device, that uses this IP address in the LAN, returns an ARP Reply packet. Then the sender compares the IP address specified in arp-ping command with the source IP address carried in the ARP reply packet. In case the 2 IP addresses are the same, a MAC address of the host is displayed. Somebody can say that we can do the same using common ping. Yes, you can, but what if ICMP is being blocked on a firewall? ARP is L2 protocol and is helpful in such case.

Let’s look what happens if requested IP address in not available in the LAN:

The sender displays a message indicating that the IP address is not used in the LAN.

As I mentioned at the beginning of this post, hosts in the LAN do not send ICMP Echo Reply packets. Let’s look at captured packets:

Now check the same for a routing device:

Unlike for hosts, it works correctly for routing device. You can check it on your real devices. ARP-ping should work as expected.